We had the good fortune escape the Joburg winter and take a break in the South Luangwa National Park in Zambia recently. I have to admit it right here and now that I am not the best flyer. Every bump and wiggle in the sky increases my worry. The smaller the plane the greater the anguish... but for all the anxiety it causes me the reward of a great holiday adventure at the end of the flight is far greater. This trip was no exception.

Our journey started at O. R Tambo in Joburg. There have been so many changes to O.R.Tambo airport of late that I feel I should give anyone that hasnt travelled in a while, a heads up to find out which terminal they are departing from. (in this case terminal A) It will prevent a long schlep if you are dropped off in the right place!

We had a quick breakfast the News Cafe. The food and service is consistantly awful, but the view is great. We were travelling with our young daughter and a great view of the comings and goings on the tarmac were more important than decent grub.

Lusaka airport is small and 1970's in style. But even here the promise of 2010 soccer travellers is making an impact. There are lots of alterations and changes happening and pretty soon this airport will have a smart new look to it. There's a bit of a wait between arriving at Lusaka and setting off on the small(er) plane to Mfuwe airport in Luangwa. If you are a coffee addict try a cappacino at the coffee stall on the main hall of the airport.

They use Zambian grown coffee beans which have a damp, earthly smell when ground. The result - delicious.
The flight to Mfuwe was on Proflight. This airline has been around a while and uses 18 seater Jetstreams to fly the Lusaka - Mfuwe route (up to three times a day in high season)  The flight is a quick one hour and unexpectedly you even get a snack and a cooldrink.

The South Luangwa lies on the eastern side of Zambia and is probably most well known for two things: walking safaris and it's concentration of leopard. In fact its much more than this. The most popular way to enjoy the wildlife is on an open game viewing vehicle. The game is everywhere and  there is nearly always something to see and marvel over.

We started our Luangwa safari at the Wildlife Camp with our great friend Patsy. Our first day was an exploration into the park. We came upon a HUGE herd of buffalo. If there was one there must have been 500. Its certainly the biggest herd we have ever seen.

We were enjoying a picnic in a dry river bed when we spotted an eland. Pats got really excited over this sighting as they are rarely seen in this part of the world. After our lunch we ventured right up to the Nsefu sector before turning back.

The next day we combined game viewing with some fishing. My husband is wild about fly fishing and wherever there is water he sees it as an opportunity to test his fishing skills. We ended up with our rods at an area called Luangwa waffa. Literally this means dead Luangwa and refers to an area of the river that has become cut off the  main river.We caught a few small fish and Pats proudly landed her first fish on fly after a few lessons from Chris! If you fancy trying your luck you will need to buy a fishing liscence at the main gate. As a private visitor (self drive) you are not allowed to get out of your vehicle - except if you buy a liscense and go fishing!

Each night at Wildlife Camp we were serenaded by different animals - the first two nights to the loud whooping of hyena running around the lodge grounds and the last to the roaring of lion and the grunts of the buffalo they had killed.

After an eventful stay at The Wildlife Camp we moved onto Mushroom Lodge which is situated just inside the Park. This lodge has great historical significance to Luangwa. Originally Mushroom Lodge was Kenneth Kaunda's private holiday home. His original quarters are available for hire on request. They are intact, just as he left them.

If 1970's memorabilia is not your thing, the new chalets at Mushroom Lodge wont disapoint. They are very comfortably furnished and offer a whole host of ceature comforts including a kingsize bed, aircon, a mini bar a full bathroom, outside shower and even wireless internet for those who cant sever their umbilical cord to the real world. The big deal about Mushroom  besides the game viewing (I'll get to that shortly) is the food. Each meal was a banquet. Lots to choose from and each choice was delicious. 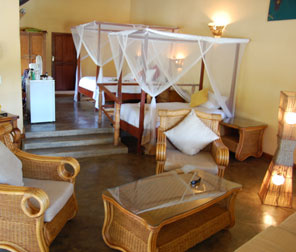 Our guide at Mushroom Lodge deserves a special mention. I have done lots of game drives and I have endured many awful "landrover jockeys" but Duncan was an exception. He was informative and knowledgable - and not in the text book kind of way. He cottoned on that we had done this many times and he changed his tack to fit in with our particular interests. He also spotted three different leopards for us. The highlight was during a morning game drive,we were just out of the Mushroom Lodge gates and he spotted a leopard (how, I don't know. It looked like a log to me) Over the next 20 minutes we watched the male leopard slowly, slowly stalk an impala ram. In the end he wasn't successful - but what a view! Unlike the leopard sighting the night before which became over run with other operators in no time. This sighting was our treat, to savour and enjoy all to ourselves.

Another memorable sighting was the pride of lions that had killed the buffalo. Nine lionesses and one malelanded a buffalo on an island in the middle of the Luangwa river. Over two days we watched the buffalo reduced to bare bones. Our last nights game drive ended at a sundowner spot to end all sundowner spots. Glowing hurricane lanterns and a table laden with goodies were laid out next the Luangwa River while the sun glowed red. Thank you Isaac and Louise for the fantastic hospitality and the trouble you took over the details.

Our 5 nights in Luangwa were over in a flash. We came back to a cold Joburg relaxed and richly rewarded with game memories.

Travel notes
Travel with USD. Even though Rand is widely accepted, the rate of exchange you are given for it is ridiculous. I was offered a rate of between R10 and R12 for a Dollar at LUsaka airport. The bank rate was around R8 - R8.50 when we travelled, so a 50% difference was  enough to raise the blood pressure. Avoid this by travelling with small denominations of USD.

There are lots of accommodation options on offer depending on your budget and the levels of luxury you want. My advice is to do at least two camps in two areas of the park. The landscapes change and the game viewing will differ. Most lodges offer walking safaris in addition to game drives. If you want to do a specialist walking safari, this can arranged.

Most lodges have open game drive vehicles without a top cover. This makes hats, sunblock and sunglasses an essential in both summer and winter.

Most lodges with the exception of the budget lodges include a laundry service in the rate. Dont take too many clothes (like me) its not necessary. A jacket for evenings in winter is needed but shorts sleeved T shirts or very light long ones for the day are fine. In summer light cotton clothes are all you need. (neutral colours are best)

The Park is bordered by the town (village really) of Mfuwe. You can buy basics (cooldrinks, sweets, veg and the like) but if you leave anything important behind you are not going to get it here. So rememeber to take all the batteries, medication and clothing you will need for your safari.

If you enjoy a spot of 'local shopping' visit Tribal Textiles. They sell a whole range of hand painted textiles ranging from wall hangings to tablecloths. Your purchases keep a whole host of local people employed and you get to take something uniquely Zambian home.

See our list of safari packages for the  latest fly in special package to Mushroom Lodge or contact us on email, phone or skype to chat about a Luangwa safari that will suit you.

Best Website Traffic Services all of which are also trackable:

Aslam
REPLY
Thanks for writing such a good article, I stumbled onto your blog and read a few post. I like your style of writing... ????
Aslam
REPLY
I wrote about a similar issue, I give you the link to my site. rajacapsapro.xyz
Drisrober
REPLY
You were the shadow to my light Did you feel us Another start You fade away Afraid our aim is out of sight Wanna see us Alive super smash flash 2
seomaster
REPLY
Very interesting information, worth recommending. However, I recommend this: Creatine benefits
Body Buildo
REPLY
Thank you so much for your nice site I want to share a lot with you and learn a lot I want to be a good friend I need yo body buildo powder online buy
danish james
REPLY
It is very good, but look at the information at this address. Zonnepanelen Lommel
shouab
REPLY
I understand this column. I realize You put a many of struggle to found this story. I admire your process. Zonnepanelen Genk
Assignment Help Service
REPLY
It is perhaps the best site. You have put the obvious substance on the site and site looks great too. We are an organization that offers a task composing administration to the understudies in different subjects. On the off chance that any understudy has some issue recorded as a hard copy a task, they can settle on our administrations. Assignment Help Service
jonny jack
REPLY
Interesting and interesting information can be found on this topic here profile worth to see it. Travel
jonny jack
REPLY
It's superior, however , check out material at the street address. Zonnepanelen Geel
jonny jack
REPLY
I just thought it may be an idea to post incase anyone else was having problems researching but I am a little unsure if I am allowed to put names and addresses on here. Zonnepanelen installateurs
Aslam
REPLY
On my website you'll see similar texts, write what you think. odzyskiwanie danych Ciechanów
jonny jack
REPLY
I use only high quality materials - you can see them at: Zonnepanelen Hasselt
jonny jack
REPLY
Listed here you'll learn it is important, them offers the link in an helpful webpage: Prijs zonnepanelen
jonny jack
REPLY
There is so much in this article that I would never have thought of on my own. Your content gives readers things to think about in an interesting way. Zonnepanelen Genk
salman
REPLY
Initial You got a awesome blog .I determination be involved in plus uniform minutes. i view you got truly very functional matters , i determination be always checking your blog blesss. thailottery
Aslam
REPLY
In this case you will begin it is important, it again produces a web site a strong significant internet site: https://dewiqq.shop/
gadgets
REPLY